Examples of bespoke End of Term and Progress Reports

From PARS
Jump to navigationJump to search

At TASC we will try to help our customers wherever possible but it is important to note we are software specialists, not network managers or server engineers.

We have neither the remit nor the expertise to log on to your server and resolve performance issues for you.

In a well configured environment (comprising of the IIS server, the SQL server and the network) PARS will run quickly. Any performance issues are the result of issues in the environment, not the result of the PARS programming.

Determining if PARS is Running Slowly 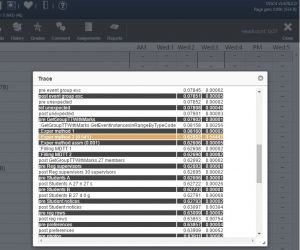 PARS running on an Intel i5 SQL server with mechanical drives

Hold down CTRL and SHIFT when opening a register from the main PARS Connect diary page. Any register will do.

Seating plan trace can be viewed when clicking 'seating plan' and CTRL, SHIFT, ALT from a register

If the register takes longer than 5 seconds, examine the times in the Trace window to see what is taking a long time. You should repeat this a few times to get consistent/average timings.

An example Trace Window for a real school during peak time

The "Exper method 2" should always take the longest amount of time. This is the process of retrieving attendance marks from SIMS. Nothing in either PARS or SIMS can be changed to improve this time; if Exper method 2 is taking too long then reconfiguring the system is the only way to improve performance.

If the register is taking more than 5 seconds to load, Exper Method 2 is taking less than 3 seconds and one or two times in the Trace Window are highlighted in orange or red, post a ticket on the helpdesk with a screenshot of the Trace Window.
In any other case, the root cause of performance issues in PARS lies with either your IIS server or your SQL server (or both).

In general terms any performance issues will be lie with either the IIS server (due to overuse) or with the SQL server. Use this section to decide whether it is the IIS server or SQL server causing the issue:
PARS main menu > System management > System > Performance monitor

The easiest to rule out (and to fix) is the IIS server.

All four LEDs should be green. If any are yellow or red, there is a problem on the IIS server which must be resolved. You may not have enough memory, enough cores that are fast enough to cope, a failing or slow disk drive that cannot keep up or a poorly performing Network Card.

Running the IIS server as a Virtual Machine can cause additional problems; Power Saving features can be left on and there may be settings on the Host to limit CPU performance to a percentage of the host's capability (nominally to maintain CPU cycles for other VM guests) that will have the effect of crippling the IIS server's performance.

If the IIS server is running well turn your attention to the SQL server. This will have the same potential pitfalls as the IIS server, and more, when running as a virtualised machine and sharing the host with the IIS server.

This is a stress test that attempts to write a number of records to the SIMS and PARS databases, update them and then delete them. This will give a baseline figure as to the performance of the SQL server. You should expect to get around 2 minutes each for the longest PARS tests and 3 minutes each for the longest SIMS tests. If they are much longer than expected, your bottleneck is with the SQL server.

Automated tasks or reports may increase the load on the SQL server. You can find a list of the automated jobs and their scheduled run times via:
PARS main menu > System management > System > Automation > Job list

If any of your jobs are scheduled to run during busy times (typically 8am - 5pm) then consider rescheduling them to run at a quieter time. Jobs can be rescheduled by clicking the magnifying glass button next to their title. These changes will not take effect until the following school day, so you will need to wait until then to observe the performance of PARS.

Automation should also build data caches so that end users do not have to. To test that automation is building the caches go to:
PARS main menu > System management > System > Cache viewer

If automation is running but not building data caches, run a PARS Service Pack.

Sometimes poorly written or recursive SIMS User Defined Reports, amongst other things, will require access to SIMS datatables for a long time which denies access to those datatables for other users. Other users are then forced to 'queue' until the datatable is unengaged. The blockers tab of the performance monitor page will show whether this is happening:

Note than some unobtrusive blocking is normal, so use your judgement as to how frequently and for how long blocking occurs and from which workstation and products, and whether this is a root cause or a symptom.

Some tweaks in PARS itself may be possible to improve performance but these are likely to only affect certain areas of the system, such as saving behaviour incidents. The following report will indicate the settings in PARS that may affect performance:
PARS main menu > System management > Management reports > Performance

Archiving attendance data. Capita recommend that you archive your attendance data ever year. If this has not been done for many years, it can cause performance issues. Contact your SIMS team for advice on this.