Examples of bespoke End of Term and Progress Reports

From PARS
(Redirected from Group management)
Jump to navigationJump to search

Pupils and staff can be placed into groups in PARS. All of your user defined groups will from SIMS will be pulled across, as well as SIMS' other groupings such as year groups, academic classes, ethnicities, etc. You can also create PARS Special groups which have specific functions.

The group manager page shows all of the groups that currently exist. Clicking on any of the groups will load a list of the pupils in that group and their membership dates to that group. 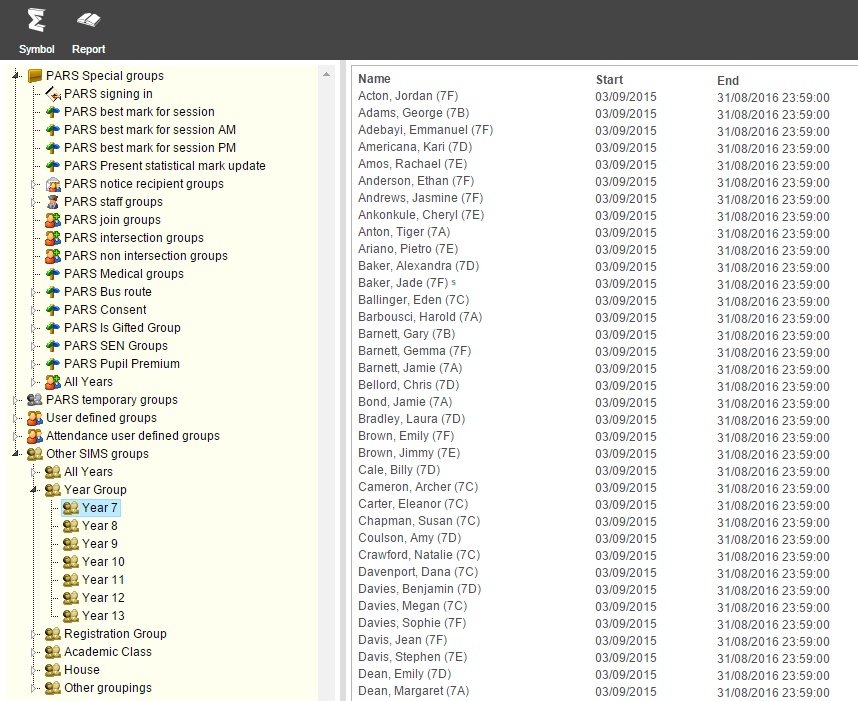 To create a new group, first click the on kind of group you want to add from the left side of the page i.e. User defined, or PARS notice recipient.

If you want to rename your group, first click on its name. Then click on the edit button from the top-left and a window will open allowing you to rename the group. The "Edit" button at the top-left is not used for managing the pupils within the group.

To delete a group, first click on its name to select it. Once done, click the "Delete" button from the top toolbar. All pupils will be removed from the group, and the group itself will be deleted.

To add pupils to a group, first click on the name of the group that you want to add them to. You will then have a section on the right of the page that allows you to add, edit and delete pupils within that group.

Click the "Add" button from the right side of the page to add pupils to the group. You first need to choose the dates where the pupils will be members of the group; when a pupil's membership to a group expires, they will be removed from the group. Leave the end date blank if you want the pupil to be a member of the group indefinitely. When setting the membership dates, you can click on the calendar buttons to assign a date. 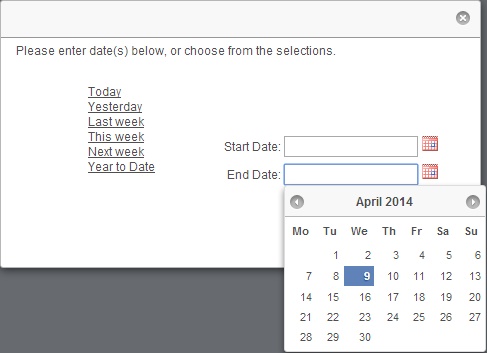 If you want to amend pupils' membership dates, first select them using the tickboxes next to their names, then click the "Edit" button from the top toolbar. You can also select the pupils then click "Delete" to remove them from the group. 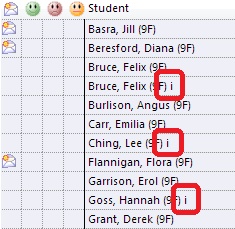 Highlight symbols in a register

Many groups can have highlight symbols added to them. This means that every pupil in that group will have a symbol appear after their name in reports and in registers. This is commonly done for pupils who have serious medical conditions. You might add the letter "i" after the pupils' names to indicate that more information about those pupils is available. Use caution when deciding which symbols to use - if staff have their register on the whiteboard pupils will be able to see the highlight symbols. For example if you use "F" for free school meals, pupils will quickly work out what the symbol means and therefore which pupils are in receiving free school meals. This may be undesirable.

You can find out if it is possible to add a highlight symbol to a group by single clicking on that group. If a button in the top toolbar appears called "Symbol" then a symbol can be added to that group. Click the "Symbol" button and a window will all of the available symbols will open. Double click on the symbol that you want to use. 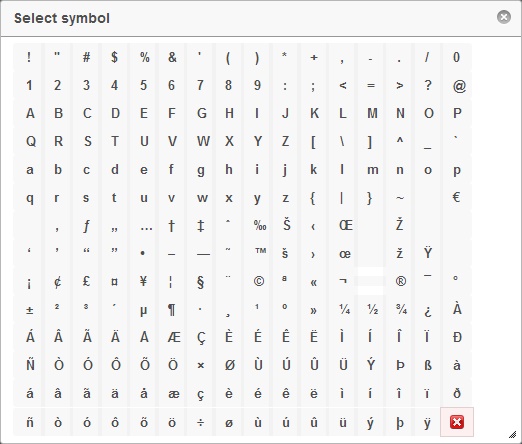 If you want to remove a symbol from the group, first select the group then click the "Symbol" button from the top toolbar. Next double click the red cross symbol at the bottom right of the window.

The Signing in module can be used to track pupils who may move on and off of the school premises throughout the day. There are various ways that a pupil can sign in: using swipecards, biometrics such as fingerprints, or a computer. In order for this to work, pupils will need to be added to a Signing in group, and signing in will also need to be configured. Signing in can currently only be used via PARS .net

A 'session' is half of the school day. The first session is the AM session and the second is the PM session. Each session will contain several lessons e.g. the AM session may contain lessons 1, 2 & 3. The session will also contain a form tutor period (although this might not appear on the timetable if the attendance marks for this are taken from the lesson registers - see Mapped periods for more info on this).

This is often done for 6th form, who are often not required to be onsite when the form tutor period is happening. Placing a pupil into a BMS group for either AM, PM or both means that the rules below will be applied to their attendance marks. These examples explain how BMS works:

Pupil NOT in BMS group:

Pupil IS in BMS group:

Pupil IS in BMS group:

You can create groups for staff members and/or pupils that you regularly send messages to. This could be Heads of Year, or sports teams for example.

When adding staff members to a group, note that their names appear in two different lists, Users and Staff. In any case the staff member will receive a notice. However if they are added from the "Users" list then the message will also be sent as an instant pop-up on their screen in PARS. This is probably not suitable for staff members who teach as they may have their register displayed on the whiteboard. The pupils in their class would then see the pop-up message.

When you create a notice recipient group, you can choose whether or not it is an "Emergency recipient group". That means the staff in this group will receive a flashing pop-up message whenever an assistance request is sent, which is a message that staff can send with two clicks if something serious happens and they need immediate help. See our assistance request page for more details. 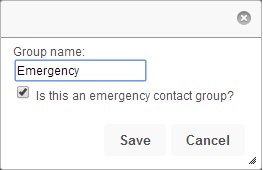 It is usually best to use staff members who always have PARS open in front of them for this purpose; office staff are often a good choice. Many schools send assistance requests to the office staff who then radio the member of staff On Call.

If the correct registration preference has been turned on, then you can configure attendance alerts for recipient groups. This means that the staff members in that group will be alerted whenever certain pupils receive specific attendance codes, such as an N, or if those pupils 'post-registration truant' (which means they were present in the AM session and went missing during the school day).

To configure an attendance alert, first click on the recipient group that should receive the alerts. You will then see an "Alerts" button in the top toolbar - click this to open the attendance alerts window. 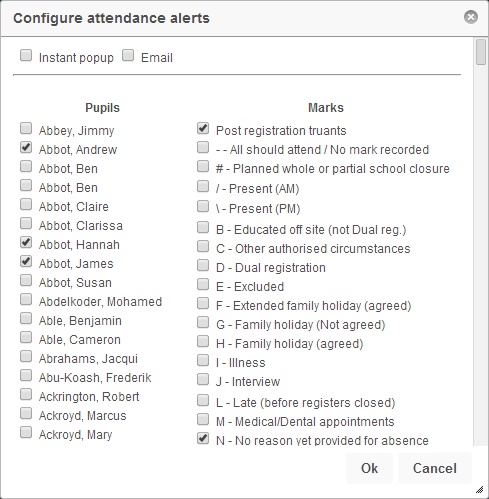 Select the pupils that you want staff to be notified of, and the attendance codes that should trigger the alert. The alert will always be sent as a notice but you can also choose to send it as an instant pop-up message and/or as an email.

If there are groups of staff members that you often need to select (perhaps for cover or monitoring) then you can create groups for them here.

Join groups are used to merge other groups together. For example you might want a 'lower school' group that contains pupils from Year 7 OR Year 8 OR Year 9.

You can use intersection groups to find pupils who are all have several things in common. For example you might want a group of pupils who are in Year 7 AND have SEN. 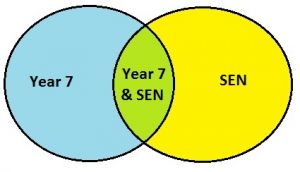 To do this, first create a non intersection group. You should then add one single group that contains all of the pupils you are interested in (this group can contain unwanted pupils as well). This group is called the master group, and will be highlighted on the group manager page. In our example, you would add Year 7 as your master group, as this contains all of the non-SEN Year 7 pupils, as well as some unwanted Year 7 SEN pupils. 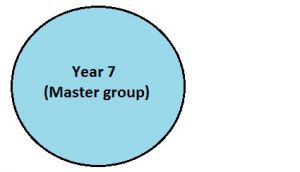 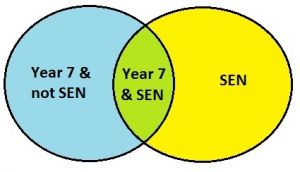 The "All Years" group is a list of every current pupil in the school. It is one of the most important groups in SIMS/PARS and is used in most areas of the software where selections of pupils are made.

To do this, first click on "All Years" under the "PARS Special groups" section. Next click on the "Rebuild" button from the top toolbar and PARS will repopulate the All Years group for you.

Whenever you run a report or deal with a selection of pupils, PARS creates a group containing the pupils you selected. This is a temporary group, which is needed by PARS for 'behind-the-scenes' stuff. These groups should be deleted periodically so that they do not begin to stack up, which can affect PARS' performance. 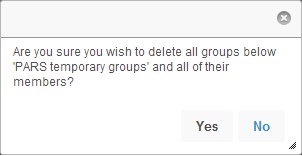 When creating a user defined group, there is an option to take ownership of the group. If this is selected, then the group will appear under the owner's name in the student selection window. 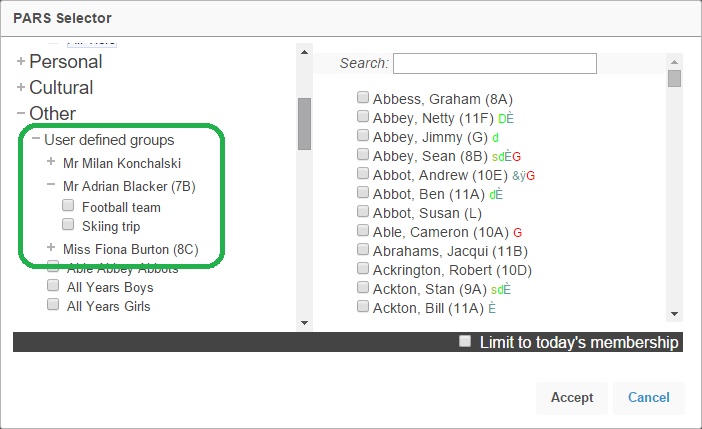 This section of group manager contains all of the groupings from SIMS. Click on any of the groups to see a list of the pupils in that group. 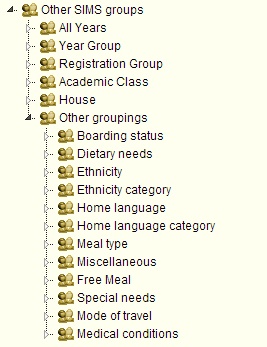