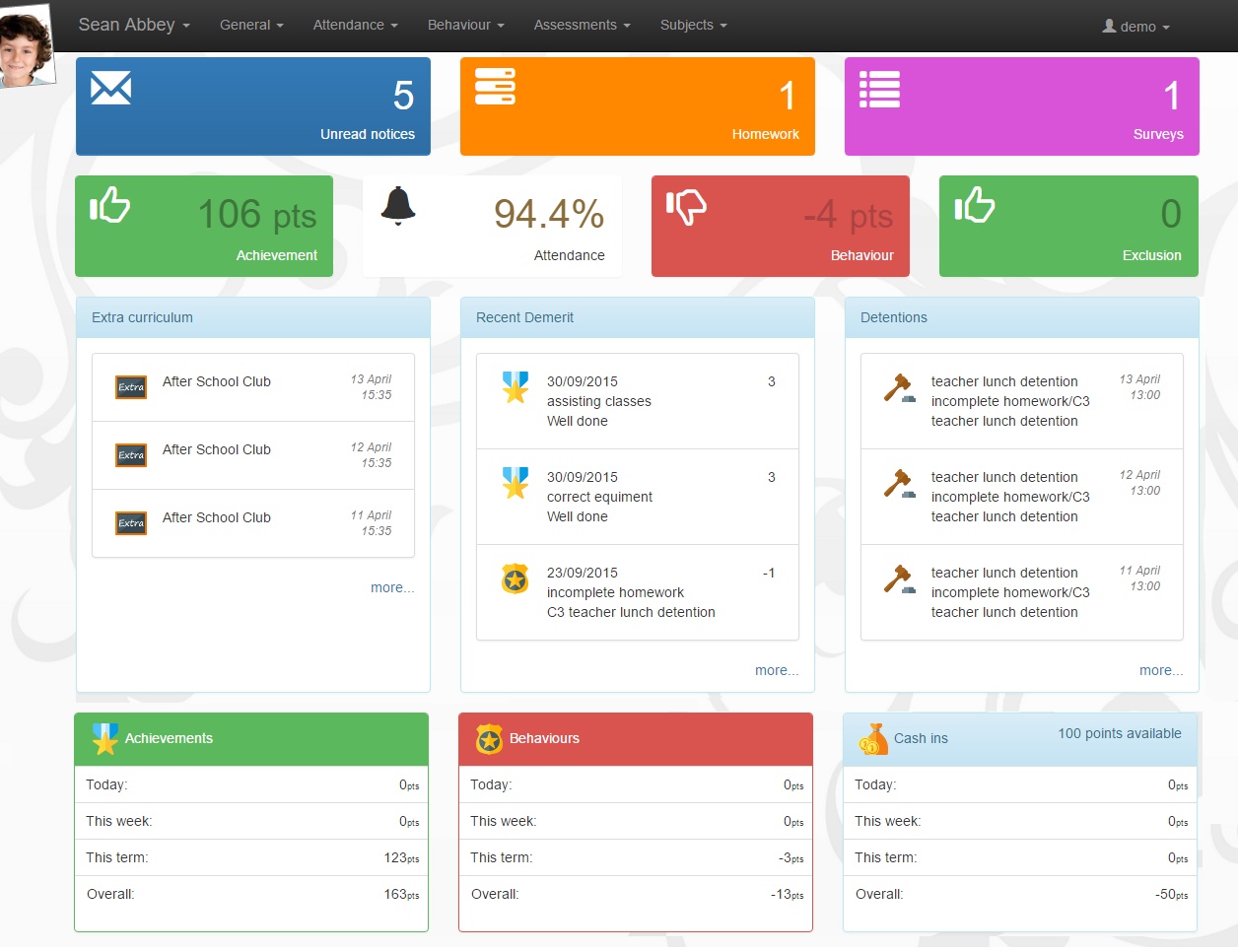 The bar at the top of the page will show coloured boxes if the pupil has any new notices or assignments, or has been invited to take part in any surveys. Each of the boxes can be clicked on; this opens an area below the box showing the new notices/assignments/surveys.

The notices box can be turned on or off using the setting called "Notices" from the Snapshot role options. Clicking the Unread notices box will display the notices. There is a checkbox next to each notice that to mark the notices as Read. 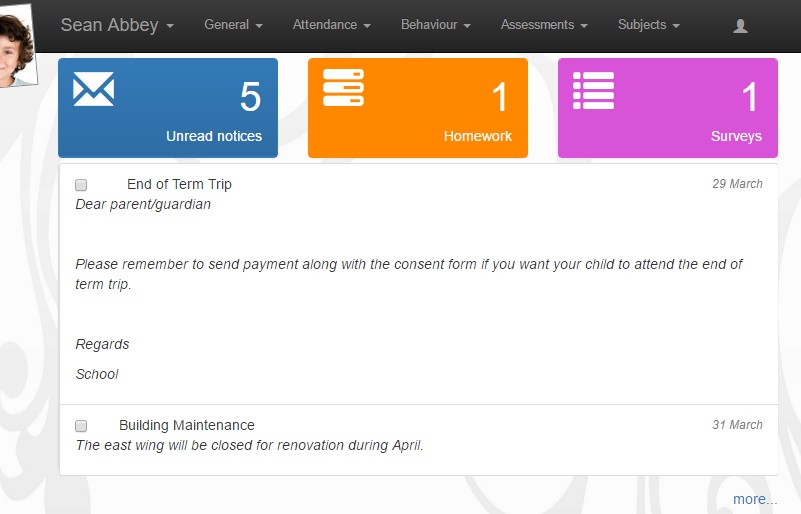 The assignments will display any outstanding assignments (that is, those that have not been marked as completed by the issuing staff member). The assignments box can be turned on or off using the setting called "Assignments" from the Snapshot role options. The assignments are colour-coded based on their status.

The surveys box will appear if the user has been invited to take part in a survey. There is no role option to turn this off. Click on the name of a survey will open the surveys page.

The alerts bar will appear beneath the Notifications bar. There is a setting called "Alerts" in the snapshot role options that can be used to turn the entire Alerts bar off. Alternatively, each of the boxes can be turned on or off using the settings immediately beneath Alerts (in the role options, as mentioned above).

The alerts bar can show information about positive and negative behaviour, attendance and exclusions. The alerts boxes will be coloured green, white or red based on the pupil's number of behaviour points/attendance percentage/number of exclusions. The boundaries for these colours are set in SIMS via Tools > Setups > Student teacher view

There is also a setting called "showing rules used". This causes the alerts bar to toggle between showing the number of incidents/attendance percentage, and the boundaries that change the colour of the alerts.

These alerts show the positive and negative behaviour for the student. The boxes can either show a count of the incidents or the number of behaviour points. The setting to decide which is shown is called "use points instead of events for behaviour" in the snapshot of role options.

The Achievements and Behaviours alerts can be each be turned on or off using the "including Achievements" and "including Behaviours" settings respectively. Both settings are found in the snapshot section of role options.

There is also a setting called "using behaviour incidents in the range". This defines the date range over which Insight will check for both Achievements and Behaviours.

The pupil's percentage attendance (based on AM and PM marks only) will be shown. This alert can be turned on or off for separate year groups - the setting to do so is called "including Attendance for years" in the snapshot section of role options. Setting this option as an asterisk will display the alert for all year groups. Alternatively, each year group can by type, separated by a plus symbol e.g. 7+8+9

The exclusions panel will show the number of days that the pupil has been excluded from school. There is a setting called "all exclusions are unacceptable" which will colour the box red if the pupil has any exclusions - it is not possible to achieve this using the settings from SIMS.

This will show the pupil's attendance to school today. This panel can show the AM and PM registers, lesson registers, or both. The setting to turn this section on/off is called "This term's attendance" in the snapshot section of role options. By default the panel will be shown for all years; it can be hidden by setting the option to a number greater than the highest year at school e.g. 99.

Note that this panel does not take account of the validation range preference and will show today's attendance in real time, including registers that have not been completed. 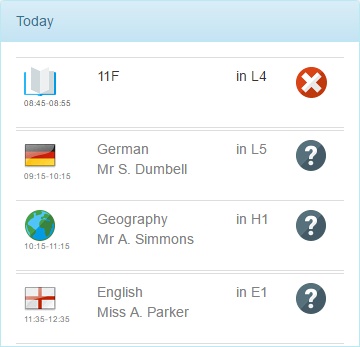 The following icons will appear to indicate attendance codes:

The setting to turn this panel on is called "Behaviour" in the snapshot role options. 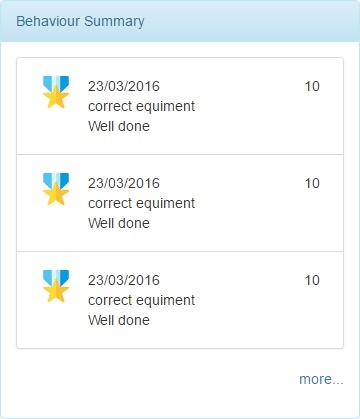 The detentions panel shows the three most recent detentions for the pupil. If any detentions are scheduled for the future they will take priority over detentions that have already passed. The reason for the detention, the date and the time will all be displayed.

The setting to turn this panel on is called "Detentions" in the snapshot role options. 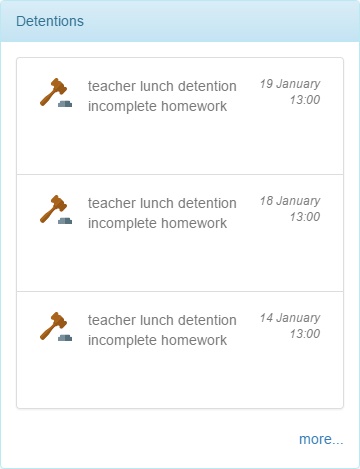 The Extra Curricular panel shows the three most recent extra classes for the pupil. If any classes are scheduled for the future they will take priority over classes that have already passed. The pupil's attendance, the date and the time will all be displayed.

The setting to turn this panel on is called "Extra curriculum" in the snapshot role options. 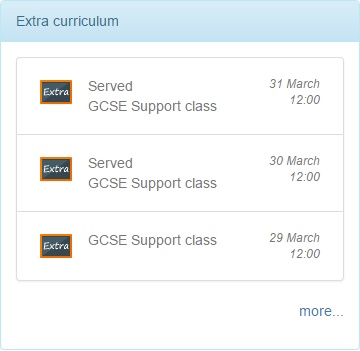 The setting to turn this panel on is in the Snapshot section of role options and is called "Recent Reports". There is a related preference, "maximum age in days" that defines the period of time that each report will appear on the snapshot page.

This line chart shows the pupil's attendance this term. Attendance is shown week-by-week, so if a pupil is absent for a week their attendance will drop down to 0 on the graph, for that week.

During the first week of a new term, this chart will be blank. This is because Insight needs at least two data points before it can draw a line. You should have data showing from the second week of term onwards. 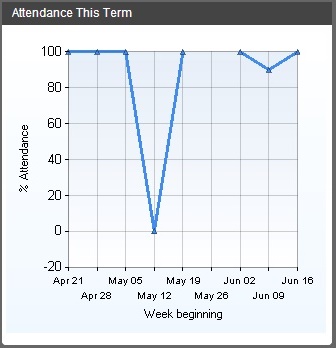 The behaviour summary section can show up to three panels, for positive and negative behaviour, and cashing in points. The "Behaviour" option in the Snapshot section of role options turns the entire section on or off.

If the section is turned then the Cashing In section may be shown on its own, amalgamated with the Achievements panel or hidden altogether. For Cashing In information to be shown, Insight must be linked to PARS otherwise no cashing in information will be displayed. If Insight is linked with PARS then there is an option in the PARS section of preferences called "Maintain cashin totals separate to accumulated points totals". If this option is on, then the Cashing In behaviour points will be shown in their own panel.